And: It turns out that I have more pictures of Big Audio Dynamite (aka BAD) than any other band. Seems about right, as I have seen them about 14 times — in three states and two countries, no less — and things with this particular group were really amazing from the start. The guys in the original fivesome (Mick Jones, Don Letts, Dan Donovan, Greg Roberts and Leo Williams) were all talented, smart, funny and worldly… yet still completely down to earth.

My friend and met BAD at their hotel in San Francisco before their show at the Fillmore in support of album number one. (We’d both loved the Clash, and so had discovered Mick Jones’ newest project by association.) As the only people there to bug them, we had a lot of chances to take photos with and of the guys.

A few weeks after we first met Big Audio Dynamite, their single, “E=MC2” hit number one on the British charts. As a fan of the UK music magazines, I had noticed a section in No. 1 magazine where people could send in their pictures with various celebrities. On a whim, I mailed off this photo of us with the whole group:

Greg, me, Dan, Mick, Don, my friend M and Leo
(they gave us their BAD caps to wear) 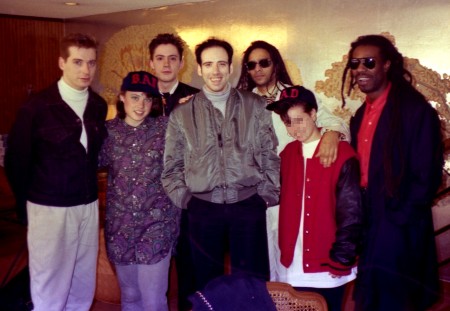 As you might have guessed, the magazine actually published it. My friend and I thought that was very cool… that is, until BAD came back through town and told us they saw the picture in the magazine. We were mortified. It had never even occurred to either of us that they would ever see it — or, if they had, that they’d possibly remember it. (I think they thought it was funny/cute — they certainly didn’t mean to embarrass us.) Lesson learned, I never shared another photo that way again. Well… not ’til now anyhow. :P

The images on this page are from the first two days we met them in SF. 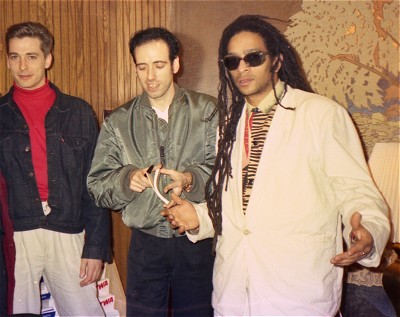 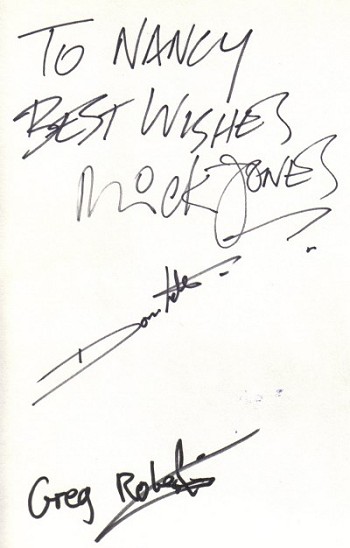 Mick, me & Don (I think this is the first day we met them) 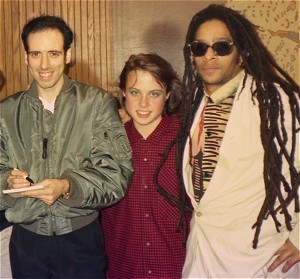 And for more from Big Audio Dynamite…