Where: Outside the Clift Hotel, San Francisco

And: After my first 60-second meeting with the band a year and a half before, I was over the moon to have a chance to meet INXS again in a less hectic environment. 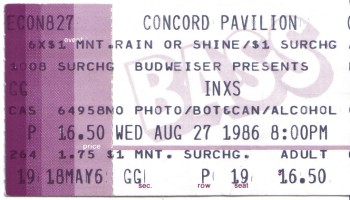 But first: Their show the night before had been just phenomenal. Michael Hutchence’s picture should be inncluded in the dictionary as the definition for “stage presence.” Crazy. A friend helped me get up in the front seated section, so I got to be right up by the stage at the Concord Pavilion show. Someone behind me was throwing flowers to the band, and one landed at my feet instead. I picked one up and leaned way over when he came to my side of the stage… and that’s how I got to give Michael a rose in front of a few thousand people.

The next day, I headed into SF on a quest to meet the band. And I don’t know quite how I managed it — or really, how everyone else didn’t — but I was the only fan there. I was talking to Garry (who was so friendly and easygoing) when Michael came back from getting a newspaper. Mr Beers was kind enough to facilitate my photo op, and then took a picture of me with Hutch. 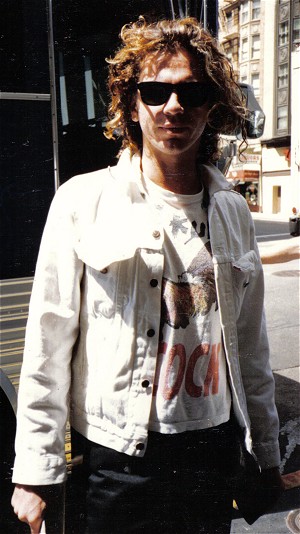 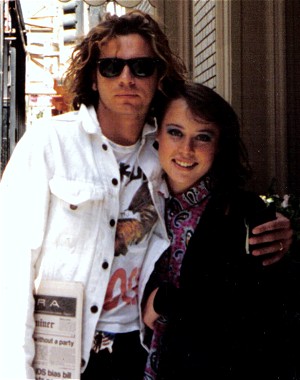 Afterwards, Garry took my camera on the bus and snapped a couple more photographs for me: a shot of Tim and Kirk, and one of Jon. 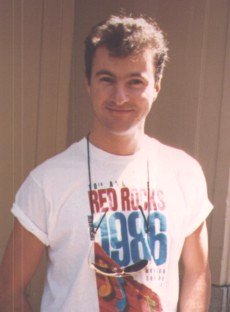 Garry (and a guy who I believe was the tour manager) invited me up to the Sacramento show that night. I told them I’d love to go if I could. The problem was, I didn’t drive yet (!) and so had to locate someone who not only had a license and a car, but who liked the band enough to drive an hour-plus to see the show.

Every one of my friends was out of town apparently, but I did manage to find one girl I sort of knew from school. She was nice, and open to the adventure. Alas, we missed the entire concert. But… we went out back with about 30 other people and caught up with the band there. My buddy and walked over to the hotel with Garry (there was a pack of women surrounding Michael) — didn’t know quite what we were going to do, but whatever it was, it was better than just going home!

The night was unusual in a very good way. We ended up hanging out with Garry in his room — and no, stop thinking that, it was all very innocent — watching TV and talking about everything from our parakeets to the fact that he would be turning 30 the following year (ancient!) but assured us, and himself, that “you’re only as old as you feel.” (It was actually all so tame that my friend started to fall asleep on the bed.) We were there about an hour and a half before we had to head home.

That was quite a day.